We all know that the basic ingredients of a pizza are flour, water, salt, and yeast. Besides these basic ingredients, you will find plenty of recipes on the internet that call for the use of oil. But why does a certain recipe ask for oil, and what benefits does oil provide? Throughout this blog, you’ll find out about both advantages and disadvantages of using oil in your pizza dough.

Oil serves several purposes in pizza dough. It contributes to flavor directly — the flavor of the oil, such as a good extra virgin olive oil — and indirectly, because oil holds and retains flavors. It also lubricates the dough for improved expansion. Another benefit of the oil is that it coats the cell structure, which helps with better gas retention. As a result, the pizza will have a better oven spring. Oil also has a tenderizing effect on the crumb as it reduces the degree to which moisture evaporates during the bake, resulting in a less chewy finished crust.

Oil can also have a negative effect on the dough. When oil is added too soon, it will inhibit and prevent the development of gluten. This prevention occurs when oil soaks into the flour before the flour is hydrated. The part of the flour that is soaked with oil can no longer form gluten. So always allow the flour to absorb water first.

Since oil also has the property of retaining more moisture in the dough, it is not a good idea to add oil to a highly hydrated dough that will be baked at a high temperature. A large amount of moisture present will not be able to evaporate easily, which can have a negative impact on the final product. The crust will have a rubbery or raw texture. 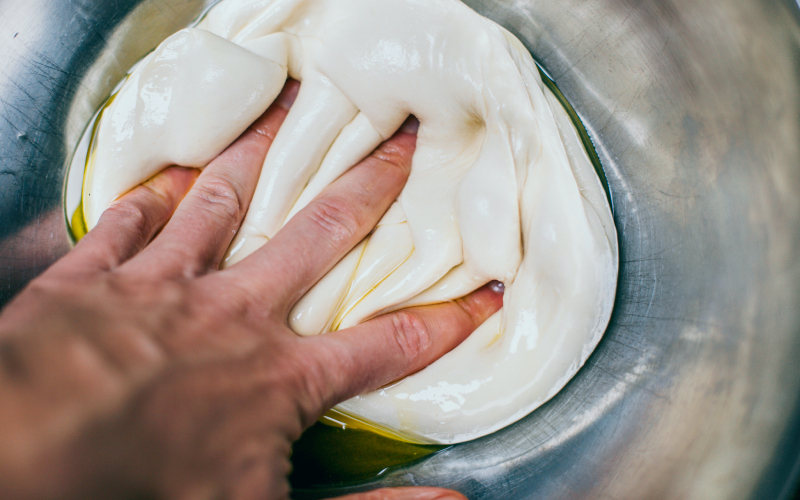 With the delayed method, water is added to the mixing bowl first. Second, flour is added along with yeast. Third, the dough is mixed until no dry flour is left. Finally, oil is added and kneaded until you have a smooth texture.